Update: The application has been converted into a tray application that continously monitors for connect/disconnect signals, and reapplies the fix. Previously, if the keyboard went into stand-by, the application had to be started again to re-fix the F-keys. A new feature has also been added that remaps the previously non-functional eject key to F13. You can then use SharpKeys or similar to remap this key to what you want. Download and replace the executable to try it out.

The K760 is a very nice keyboard made by Logitech. It is clear from the styling, keyboard layout and full name (… for Mac/iPad/iPhone) that it is not made for Windows use, but as it is a standard Bluetooth keyboard it will work almost perfectly with any operating system.

There are two fixable issues:

The first issue is easily solved using keyboard re-mapping software - I personally like SharpKeys. After installing SharpKeys, SharpKeys will let you type the button you want to change, and what key code should be sent when that button is pressed. After this is done, it should look similar to the image below (with the exception of the caps-lock remapping): 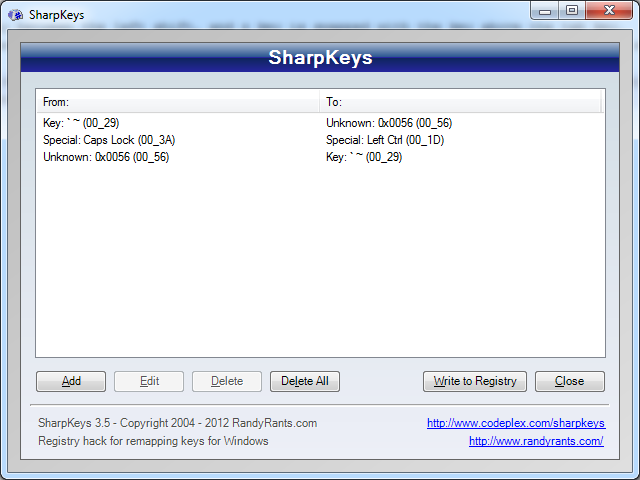 The second issue is quite tricky on the other hand. On Linux, you can use Solaar for most Logitech products, but from looking at the code, it looks like it is Linux only, and only for Logitech devices using the Logitech Unifying Receiver (ie. not bluetooth).

Luckily, the protocol used by the K760 is the same as the one used on the K750. The protocol is called HID++ 2.0, and some documentation is available. Through a combination of looking at the Solaar source, and HID++ documentation, I managed to throw together an application that can toggle between F1-12-keys on by default, or function keys on by default.

Source for the application can be found on Github.

Update: By request, a pre-built version of the application.

When I moved the oktet.net domain from Servage to Unoeuro in 2010, I originally intended to write a small blogging/cms framework to make updating this page easy. I had been running Wordpress for a while, but found it overkill for my needs. I did not need the many features it provided, and having to keep it updated and the comments free of spam was tiresome. Instead, the page turned into 3 years of an ugly static website.. After reading lots of posts about static webpage generators on Hacker News, I decided that it would be a good compromise between ease of use and low maintenancen.

The choice fell on Jekyll with Github Pages, as this saves me from running the generator when the content is updated, and gives me version control of the page for free. Armed with these new tools, I hope to resurrect this site, and use it as a place to share small tips & tricks and possibly hobby projects.